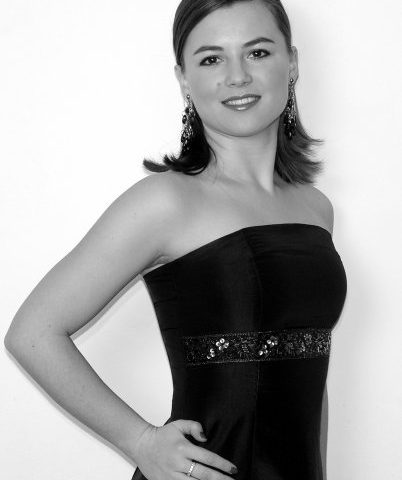 Born on the 22nd of April 1984, Baia Mare, Romania. In June 2009 she graduated from The National University of Music from Bucharest with a Master degree at Ph.D. Eleonora Enachescu’s singing class and she became an Erasmus exchange student at the Norwegian Academy of Music from Oslo for the spring semester 2008. In the spring semester of 2009, she had an Erasmus training scholarship in the Norwegian Opera House and Ballet.

Professional activities:
Opera performance with The telephone by G.C.Menotti at the Romanian Opera House from Bucharest
Opera performance with La voix Humaine by Francis Poulenc at an important theatre from Bucharest, Act Theatre and at the Norwegian Academy of Music from Oslo
Opera performance with L’elisir d’amore (Adina’s role) by G. Donizetti at the opera studio from the University of Music from Bucharest
Concerts and recitals at the Romanian National Opera House Studio which promotes the young talents
Concert with Ramnicu Valcea Philarmonic Orchestra organized by Romanian National Radio and Television which promotes young talents, conductor Florin Totan
Concerts in many cities from Romania and in important concert halls from Bucharest
Arias and duets concert in Molde and Tomrefjord, Norway
Arias concert at the Swedish church from Oslo with Barbro Marklund-Pêtersone
Masterclass with Håkan Hagegård at the Norwegian Academy of Music from Oslo
Arias and duets concert in Grieg festival, Oslo, June 2010Spoken languages: English, French, Italian and Norwegian